“I believe that when we build a guitar and truly embrace the art of lutherie, it becomes more than a guitar, it is our canvas on which we share the unique beauty of our stories, our message, and our love with the people around us and even the world. I’m continuously amazed, inspired, and sometimes brought to tears (the good kind) by the guitars and stories I get to see from those of you who write to me through theartoflutherie.com and from the members of the Luthier’s EDGE. Something wonderful and important happens when we share our stories of triumph, of tragedy, of overcoming fear, and of the beauty that each one of us has to share with the world. I’m excited to be able to share some of these stories with you in a new series that I hope will inspire you to reach higher, to tell your story, to make your first guitar, OR make your next guitar even better!

James, a long-time member of the Luthier’s EDGE,  sent me a photo the other day of his 4th guitar that he recently finished building. Behind every guitar is a story and I love to read every single one that my students share with me, it is a true joy. This one was not only a beautiful guitar but a great story to match. James builds guitars as a hobby while finishing up law school and as you will read, he took on some pretty big challenges and reaped a big reward. I really identify with his approach to learning from mistakes and learning to ‘balance the pursuit of excellence with a smile’ as he so aptly put it in our interview below.

I hope this interview and video inspires you and sparks or rekindles your passion for handcrafting guitars!” – Tom Bills

When did you start building guitars and why?

When I was in 10th grade I was playing guitar in jazz band, and the music store I went to for private lessons hosted clinics for Taylor Guitars all the time. I remember going to see Pat Kirtley, Doyle Dykes, etc. That was back in the late 90’s. I was also listening to music that was really acoustic driven. That context made me fall in love with acoustic guitar, and I remember coming home one day after a lesson and wondering whether or not people ever made their own since those Taylors were out of reach. I found Kathy Matsushita’s website, then a forum, and I’ve been hooked since.

I tried building a few steel string acoustics in college but botched them all, usually right around the time when I closed the soundbox. I really didn’t have any idea what I was doing, LOL. I was trying to do this without any tools, plans or instruction, and very little woodworking skill. One of the memories I love is using a drill to cut out tops and backs by drilling a million little holes around the outline, just using what I had. None of that mattered to me though. The process and the simple act of having my hands involved was so deeply satisfying, and I think I still like it more than having the actual guitar.

I finally finished an acoustic about seven years ago. I got to different stages of at least four before that! However, in that time I also made a few drum sets, a stave snare drum, electric guitars, and four or five tube amplifiers, so I was finishing things, learning, and developing; I just wasn’t tackling the instrument I really cared about.

Tell me about the most recent guitar you made? 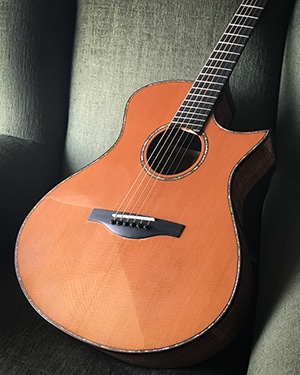 A few years ago I had some of my tonewood out, just checking it out and daydreaming. My wife came in and saw some koa and got really excited. She said, “I want you to make me a guitar out of that!” So I said, “OK!” and started thinking about what I wanted to build. She doesn’t actually play guitar, so it would be mine, and I wanted to take the next step in my journey.

I was starting to get into fingerstyle and wanted a few things tonally that were different than what I’d been making. I wanted a slightly darker sound that was more enveloping and reverberant. I also wanted to be able to tune lower than DADGAD without losing any articulation on the lower strings. I also ended up using slightly wider string-spacing at the nut (1 13/16″).

I decided to pair the koa with redwood. I knew a longer scale-length would be good for the bass but didn’t want the trebles to be overly strident, so a multi-scale was a good fit. I also wanted to challenge my technical ability by building the neck myself (I had used pre-made necks until then) and using a Florentine cutaway. I got pretty excited when I realized a local makerspace had a vacuum pump and also decided to use laminated sides.

I also wanted to develop an original body design that sat in my lap more comfortably than what I had been using. I’m drawn to the presence of larger guitars, so I wanted it to be a touch bigger than a typical 15.25-15.5″ OM.

What was the biggest challenge you faced while building it and how did you overcome it?

I am not a natural artist. I can tell you when I like certain color schemes or when something has good visual balance, but coming up with an original guitar design? Yikes. And then drawing it? Let’s just say drawing is not my gift.

I would look at guitars that appealed to me and try to figure out what it was about them that I was drawn to. Someone told me about flexing a ruler to draw smooth curves, and that really opened the door to start putting ideas down on paper. On nights when I had the house to myself, I would mark out the basics like lower bout width, body length, and upper bout width on some velum paper with an 1/8″ grid, and went through sheet after sheet trying things. I still remember the night I drew something that appealed to me. I actually didn’t trust myself and taped it to the wall to live with for a while to see what I thought over time. It’s crazy how the tiniest variations in a curve can make or break something that’s supposed to flow like the outline of a guitar. People who have the ability to just see these things really amaze me.

Designing the headstock was a similar process.

What advice would you give other people who are just starting out or who are ready to try a new and original guitar design?

Be patient, deliberate, and let it bring you joy. Mistakes are part of the process, but being intentional about learning from them really helps me
minimize the discouragement.

I also do an after action report on every guitar. It’s nothing formal, just a reflection process. I think about what I did well, where I want to improve, how to get there, and even processes that went well but I didn’t enjoy just in case there’s some other method I’d like more. Then I make notes so I don’t forget. I think this has helped me a lot.

When it comes to developing an original design or even just thinking out the details of an upcoming project where something might be different or new, the Design course is fantastic. It was pretty critical in helping me plan my cutaway since the curve had to coincide with the taper of the fretboard.

As far as developing the design itself, if you’re like me and don’t just naturally see things, make a library of images of guitars you love. Look for patterns and similarities. Get yourself a lot of velum. 🙂

How did being a member of the Luthier’s EDGE help you in your process?

The Luthier’s Edge is all over this guitar. Even just watching someone like Tom do something has this subconscious, osmosis-like effect that makes
me work better. But specifically:

– The Fanned Fret Course came at the perfect time for me. I still can’t believe I cut the fret-slots without a jig and how easy they were to do.

– The mini-course on reinforcing the neck with carbon fiber was also perfect. The neck on this guitar is unbelievably stable. I never think twice when I’m going through different tunings. I did this wild swing the other night where I went from standard tuning to DADGAD tuned down to Bb, and the action and relief stayed the same.

– I loved the Headstock Back Strapping Course and wouldn’t have tried one without it.

– I had already fretted my fretboard when Fretwork Mastery came out, but it’s going to help me correct some issues I ran into on this one.

– I didn’t recess the tuners on the front of the headstock, but otherwise used Tom’s T3 system.

– The Art of Guitar Design was invaluable. It helped me think about a lot of the smaller details I probably wouldn’t have considered otherwise.

Don’t give up! Balance the pursuit of excellence with a smile and have fun with the process.

Ready To Take Your Guitar Building Skills To The Next Level?

Join Luthier’s EDGE and get access to a growing library of exclusive guitar making luthier courses, tutorials, and more. 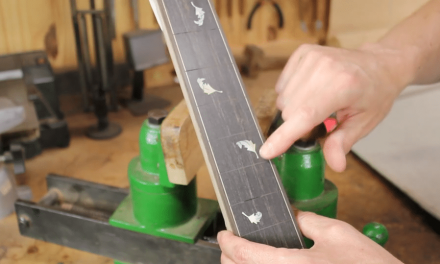 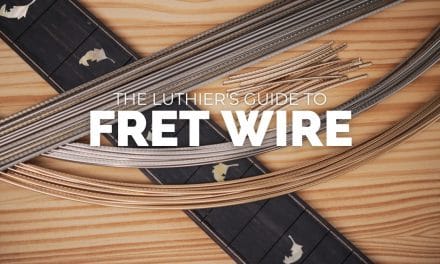 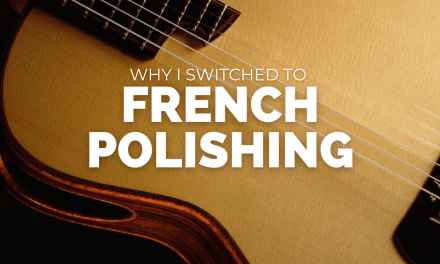 Why I Switched To French Polishing My Guitars 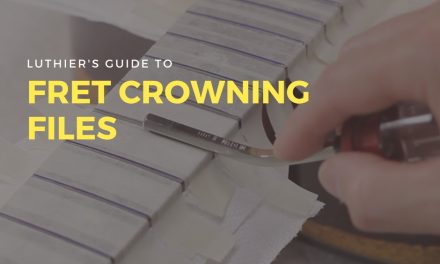 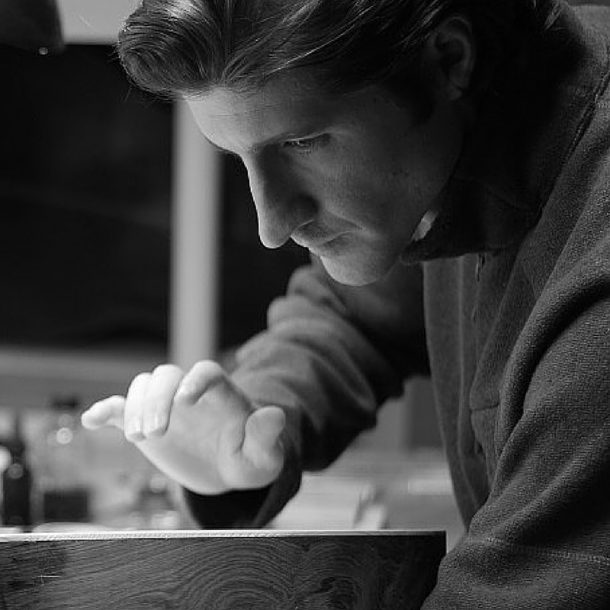