How Does A Guitar Work? Guitar Physics Part 2: Bridge & Top 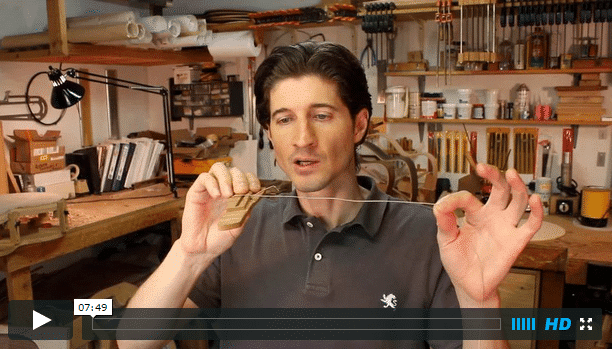 In How Does A Guitar Work? Part 1 we looked into what is going on with the guitar string when it is set in motion, and the kind of information and vibration that is present within it. Now we’re ready to move on to the next step which is the point at which the string energy gets converted into a format that is usable and understandable to the top of the guitar, the mechanism for this as you know is the guitar bridge.

How The Guitar Bridge Works

In the video I show you an old mock-up of a bridge I made a while back. This was an experimental prototype for a design I was testing years ago to make sure it would work before I built a guitar using it. It did work actually and I am still using a similar design like this today. I think using this as a prop is a handy way to demonstrate what is happening on an actual guitar. In the first section on physics we talked about what is happening in the guitar string itself. This might not be the best example but you can kind of get an idea of what I mean. While the string is in motion it is resonating back and forth and as the string does this pattern of vibration, the center point of the string moves outward especially at the fundamental note, it must pull inward on the ends of the string. As a result of this, the string is actually pulling in on the string ends and effectively becoming shorter at the widest point of oscillation, and then recoiling back again. So the behavior of the bridge is effected by the string. When that string vibrates it becomes a little shorter as it reaches its highest point of oscillation, and it actually moves the bridge forward and back. This rocking motion, forward and backward, is the main way that the bridge is taking that energy from the string and translating it into something that the top of the guitar is able to deal with. 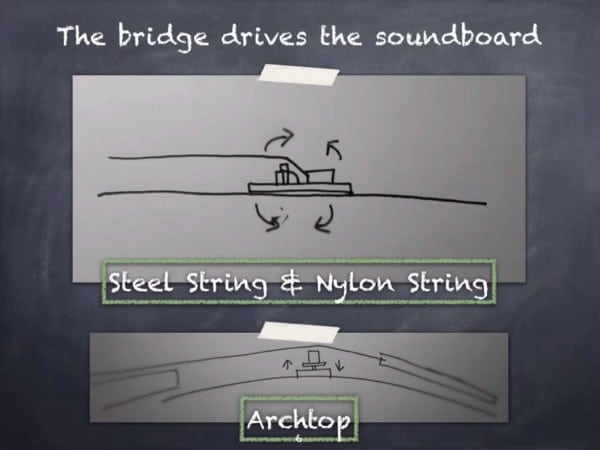 Of course the bridge is doing other things too which we can talk more about later on, but for now I wanted you to see the main mechanism that is being used here to translate this string energy. Now this demonstration that I am showing you is only for nylon string and steel string guitars, the artchtop guitar has a different mechanism.
In the above slide you can see in the top picture that there is an example of the same rocking motion I just showed you for the nylon string and the steel string guitars. In the bottom picture the archtop guitar has a completely different mechanism it uses to drive the top of the guitar, to convert the string energy into something the top understands. Because of the fixed tailpiece on an archtop there is less of a rocking forward and back motion, I am saying less because there is some of that behavior happening still, just less than that of the steel string and nylon string guitars.
So the archtop guitar, rather than rocking back and for as the string pulls on it while in motion, is actually pumping up and down as you saw in the previous image. This becomes really apparent in the violin family of instruments because the violin has a treble post under the treble side of the bridge inside the violin body. So what that is essentially doing is forcing the bridge to pivot over the treble post and pump on the base side of the bridge. Like we mentioned before, I am sure it probably has a little bit of the forward and back driving motion too, but in essence when I am thinking about the system of my archtop guitars, I’m building more based on the up and down pumping action, and when I am building my steel string and nylon string guitars I am developing all of the internal systems and support with the forward and back rocking motion. Keeping that in mind while you build and design your guitars is an important thing to remember.

The Behavior Of The Guitar Top

When the bridge is in motion it is going to load that energy into the top of the guitar. From this point on, the energy is kind of rippling through the guitar top and behaving in a way that we are telling it to behave by all the parameters that we set up which are things like the bracing and the thicknessing or graduation of the soundboard, the shape of the bridge, all these different types of things that we have put in place. Let me put up anther slide here where you can see a very exaggerated drawing of the top responding to the motion of the bridge. 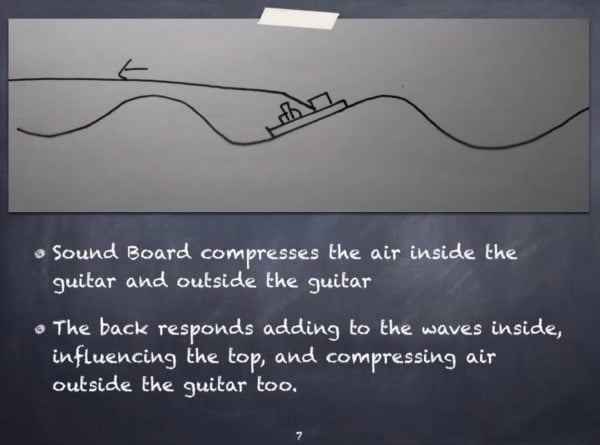 Once the top is in motion, the air outside of the guitar is going to be compressed into waves mimicking what the top is actually doing and the air space inside the guitar is going to be compressed into waves and that is going to set the back of the guitar in motion. Now we have the entire system in motion, everything is in full swing, moving and responding to one another. Hopefully if we have done our work right, all these things are in tune in a way that they don’t compete with each other but they actually work together in a similar way that the fundamental note and its harmonic series works together to make a pleasing sound. We want to adjust the top, the back, and the body cavity, and all the components to be harmonious with one another. Not only in the way they respond like tape tuning and things like that, but I like to go a step further and make them multiples of one another from a measurement or dimensional standpoint. ( Which is the topic of another class that I am putting together right now about how beautiful and harmonious the mathematical structure and grid of a guitar can be when you build from that perspective.)

So this essentially wraps up our overview of how the guitar is working when the string is plucked and what is going on within it and how it behaves. We looked at how that vibrational string energy is taken and translated into and through the top, into the body, the back. Eventually the whole guitar is in motion and it is doing its job and everything we programmed it to do, making beautiful and pleasing sounds for the listener and the player.

The next step is to take a look at the some of the main components that are involved and look at a few different ways that we might be abel to use the design and the adjustment of those components to make the guitar more pleasing , play better, and sound its best which is our goal for this course. You can view all 18 videos on guitar physics and setup by enrolling in the course here: Free Guitar Physics, Design, & Guitar Set-Up Video Course for luthiers and guitar players. 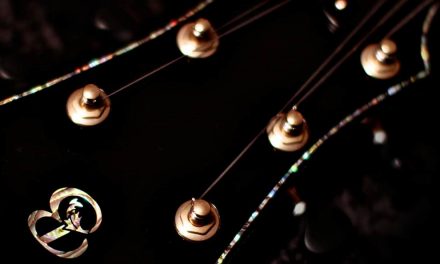 Are You Using This Powerful Technique For Better Guitar Tone? 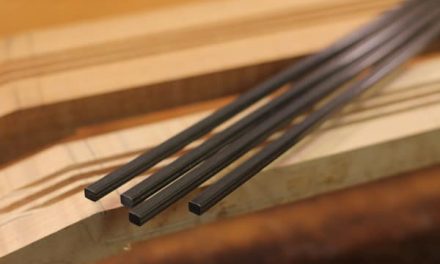